Grans back Greta: new research shows strong cross-generational support for urgent action on climate change and finds that 91% of Britain’s grans and granddads are fearful about the ways climate change will impact future generations. 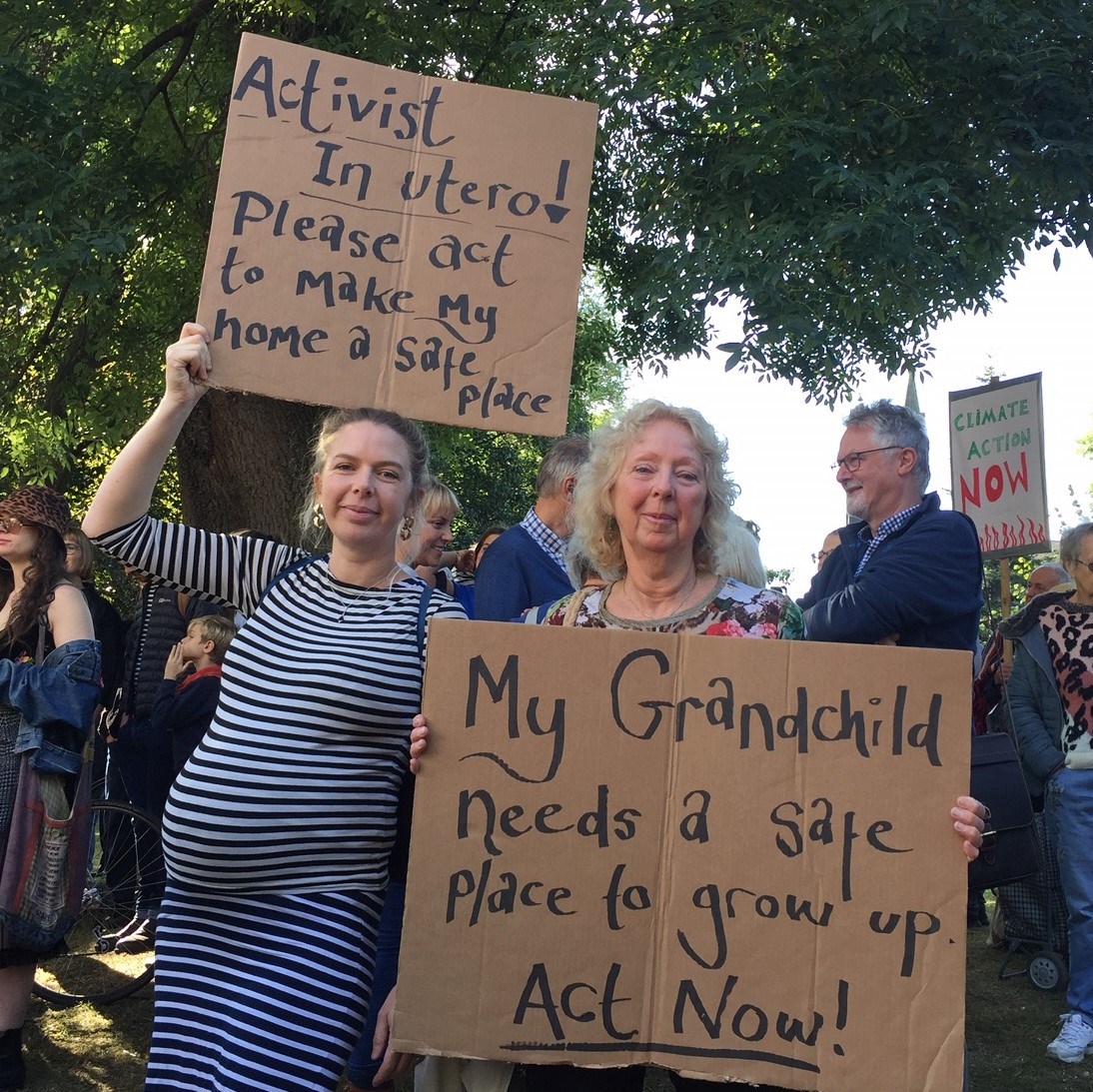 The research reveals that 91% of Britain’s grans and granddads are fearful about the ways climate change will impact future generations, and share the same worries as their younger Generation Z and Millennial counterparts.

81% of grandparents polled feel the climate emergency should be treated as an urgent problem to resolve compared with 79% of 16 to 34-year-olds. The findings defy the notion that worries over the issue are limited to 18-year-old environmental activist Greta Thunberg’s generation.

The survey is part of a report called From Attitudes to Action: Environmental concerns and behaviours in Britain. It was conducted by Survation and designed by Diffley Partnership.

4,227 adults spanning all generations were polled across England, Scotland and Wales, measuring their understanding of the climate and nature emergencies, and the barriers they face in adopting more climate friendly behaviour.

Vicky Humphries, a 74-year-old grandmother of 12 from North Devon, is among those fearful of the impact climate change will have on future generations.

She said: "We’re in a climate emergency and a biodiversity crisis and I’m deeply concerned for my grandchildren’s future.

"My fear is a future with an increase in wildfires, more powerful and frequent storms, flash floods, record-breaking high temperatures and shortages of food and water.

"Greta Thunberg is an inspiration but we can’t leave all the hard work to the younger generations.

"We need to act now and change the way we live so our grandchildren inherit a healthy planet. We will fail them if our legacy is a climate meltdown."

Newcastle grandparent and 66-year-old climate activist Jacky Doran, pictured, said: "Becoming a grandparent shouldn’t mean fearing for the future of your grandchildren, but I do. I worry they’ll be the first of many generations forced to adapt to a broken and hostile world.

"It’s the main reason I joined others where I live to prevent total climate breakdown. When speaking to our community, it’s heartening that so many understand the dangers facing our planet.

"Limiting the full force of climate change is still within grasp, but the window of opportunity is drawing in. Next month’s international climate talks will be the litmus test on whether we really can secure the safe and flourishing future our grandchildren deserve."

The research also found that people look to charities for encouragement in adopting climate-friendly behaviour and reducing their environmental impact.

Information from environmental charities was shown to be the single most important factor in motivating the public to adopt low carbon lifestyles, ahead of anything politicians say or what they see in the news.*

Over £148 million in funding raised by players of People’s Postcode Lottery has supported 2,500 charities focused on environmental and climate-related issues over the last five years alone.

Managing director of People’s Postcode Lottery, Clara Govier, said: "As a parent myself, I share the concerns echoed by the grandparents surveyed, we need to make changes now and that’s why I’m proud our players are supporting organisations working to tackle climate change.

"It’s an issue that affects each and every one of us and we must come together, across the generations, to address the challenges it presents.

"Players of People’s Postcode Lottery are raising millions of pounds every year and providing vital support for charities working to achieve a safer, greener future for all of us.

"It’s heartening to learn there is such strong, cross-generational, support for climate action and to see the crucial role played by environmental charities being recognised by the British public in this way."

Friends of the Earth and The Wildlife Trusts have received more than £28.2 million in funds raised by players and partnered with People’s Postcode Lottery on the survey.

Jamie Peters, director of campaigning impact at Friends of the Earth, said: "These findings dispel all predisposed ideas about what the typical environmentalist looks like. Clearly, care for our climate is something that transcends every level of society, and that includes age and class.

"From climate-conscious school strikers, to grandparents seeking assurances their loved ones will inherit a safe and secure planet, people everywhere are taking action in their own communities and want to be better enabled to make climate-friendly choices.

"Knowing that charities and campaigning organisations like Friends of the Earth are regarded highly by the public as a trusted source on the climate emergency only makes protecting our planet’s future even more compelling."

The findings also show that 9 out of 10 people (88%) are concerned about the harm a rise in global temperatures is causing to wildlife and animals.

Kathryn Brown, director of climate action at The Wildlife Trusts said: "People are deeply concerned about climate change and its effects on wildlife, but often they’re not sure of the best things they can do to help.

"Fortunately, there are easy steps that everyone can make to cut their emissions – as well as ways that people can help improve the resilience of nature.

"For example, everyone can help to protect rivers and the wildlife that lives in them – such as otters, kingfishers and water voles – by reducing the amount of water we use at home.

"Today’s survey shows that people are confused about the difference that different personal actions actually make. That’s why The Wildlife Trusts have put together clear and easy guidance about things you can do for the climate. We feel that absolutely everyone can play an important part in tackling climate change – at an individual, community and global level."

Mark Diffley, director of Diffley Partnership which designed the survey, commented: "This exciting and timely new research offers invaluable insights that go beyond headline findings, and drills down into the detail of the public’s concerns, motivations and behaviours.

"The findings challenge established preconceptions and pervasive stereotypes around who is worried about climate change, and what people are willing to do or give up to tackle it.

"It also advances practical and actionable solutions to the obstacles that individuals face, and identifies effective ways to communicate, encourage and facilitate positive environmental behaviours through strong partnerships of governments, businesses, charities and individuals."

*Respondents were asked: "On a scale from 0 to 10, where 0 is 'Not at all' and 10 is 'A very large amount', to what extent do the following motivate you to reflect on/reduce your environmental impact." Information from environmental charities and organisation scored highest with a weighted average of 6.02, compared with 4.20 for what politicians say and 5.86 for what I read/hear in the news.

From Attitudes to Action: Environmental concerns and behaviours in Britain - findings.