It was a spectacular end to the week for 101 islanders in North Uist and Berneray, as their postcode sector, HS6 5, shared a £3 million prize pot in People’s Postcode Lottery’s Postcode Millions draw.

Two neighbours from Berneray scooped £193,055 each when their postcode, HS6 5BJ, was revealed as the full winning postcode at a special event in the local village hall. The isle of Berneray has a population of just 140. 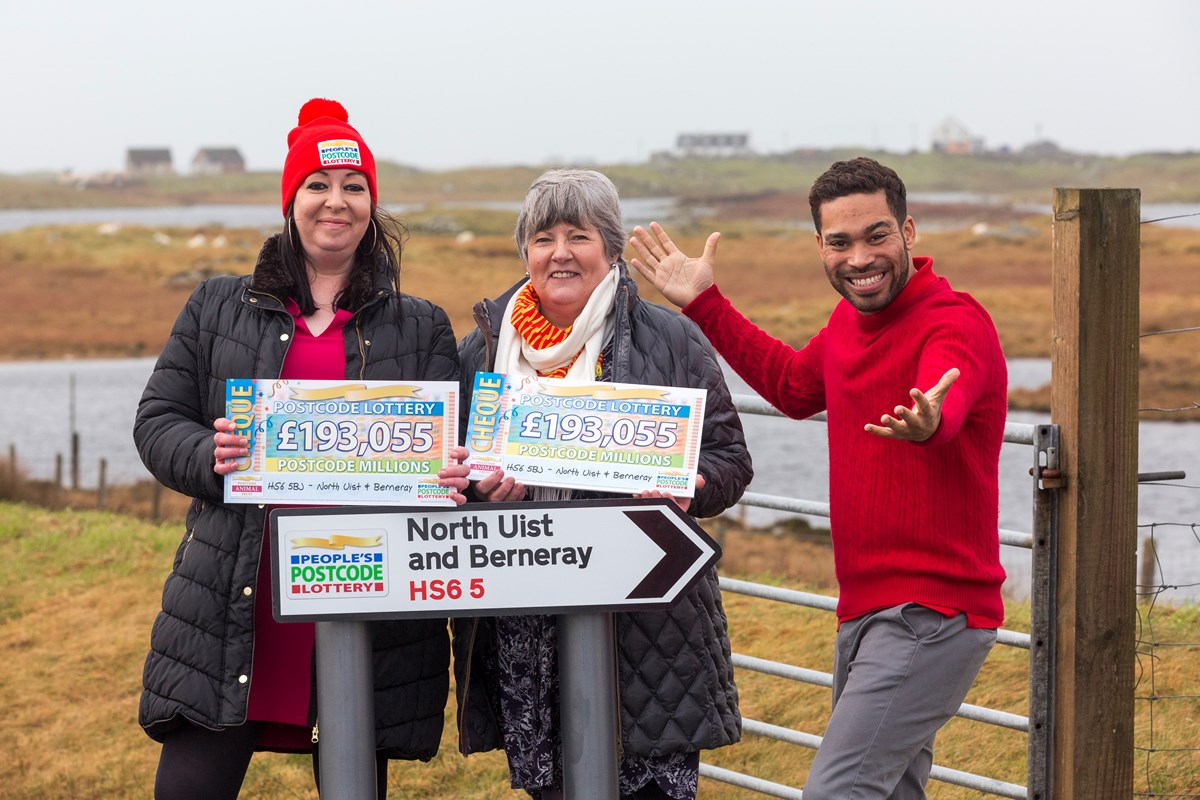 Pamela Macaskill, 43, was one of the lucky players in the full winning postcode, receiving a staggering £193,055.

Pamela, who works at Taigh Chearsabhagh Museum and Arts Centre was overwhelmed when she was presented with her cheque.

She said: "I’m just numb, my mouth is dry. I’m completely speechless. You just don’t believe it will ever happen. I mean that’s massive isn’t it?! My palms have not stopped sweating.

"The whole place has been buzzing. It’s such a big amount for such a small community. I know pretty much everyone here! It means so much to all of us."

Pamela’s husband Angus is a bricklayer and was working just around the corner when Pamela received her cheque. When she called him to tell him the good news, he didn’t believe her.

She continued: "Angus didn’t believe me!  He wasn’t taking anything in. He’ll get a new quad bike if he’s lucky."

Pamela and Angus have two girls, Lucy, 14 and Faye, 12 to treat with the winnings.

She said: "I love Disney so I might take my girls to Florida, but I guess I should go somewhere a bit different with this amount. Maybe Finland, or somewhere hot. It’s my sister’s fortieth soon so we can take a girls’ trip away. I don’t know, there are so many options!"

When asked what she’d do tonight to celebrate, Pamela said she’d be stopping by fellow winner Caroline’s house.

"I’m not going home, I’m going to the pub! I’ll be stopping by Caroline’s fridge tonight too. It’s stocked up with all sorts of good stuff so lots of us will be there celebrating!"

The Caroline Pamela is referring to is Caroline Macdonald, a medical receptionist, who won £42,850 thanks to playing in the postcode sector. Caroline has fully stocked up her fridge in preparation for the weekend celebrations.

She said: "There’s champagne, beer, cider, everything you could possibly think of! If people want to then they can come to my fridge. The doors open! They can knock on my door and ring my bell!"

The second winner in the full winning postcode was Sharon MacKillop, 59, a retired teacher, who worked at local school, Sgoil Uibhist a Tuath. 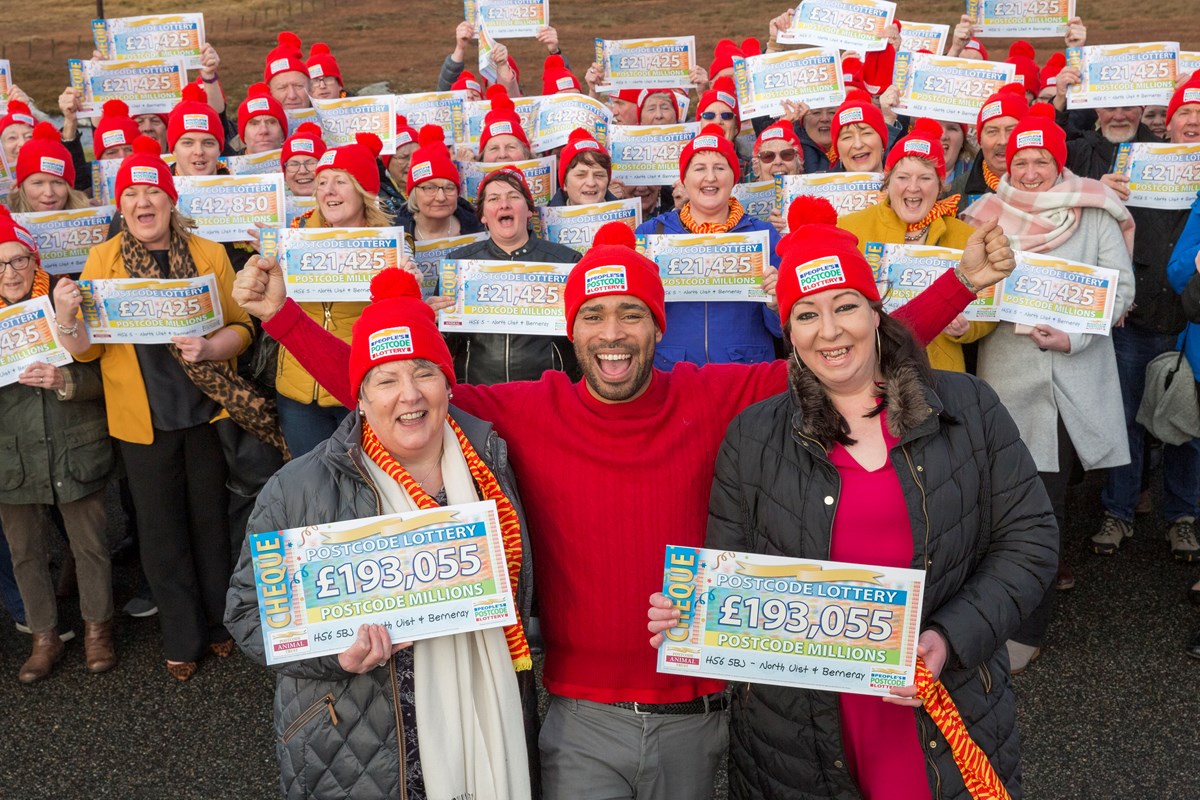 Sharon was left speechless on stage after learning she had won £193,055. After taking a few moments to think about what she could do with her winnings.

"I’m going to take my husband out for dinner!"

After dinner with her husband, Sharon has a few plans for what to do next.

"The car probably needs replaced, the outside of the house needs painted, a new mobile for my husband. Maybe a holiday, I’ve never been on a cruise!"

She will also treat her three children, Donald, Patrick and Kenny, along with her husband John Angus.

Sharon was also thrilled for her friends and neighbours in the area.

She said: "We all know everyone here. It’s lovely that it’s not isolated, it’s a lot people in the community that have gotten a substantial sum of money."

Flora MacDonald, 57, plays in the postcode sector and won £21,450. Flora works in the local co-op supermarket and was also excited about how much of an impact the win will have on the community.

She said: "It’s unreal! There has been such a buzz on the island. Everyone has been coming in the shop and congratulating us. There’s nine of us in the co-op and eight of us have either won or know someone who did. Everyone is buzzing and we’re all happy for everyone."

Danyl said: "It’s certainly been a day to remember in North Uist. We’ve had prizes in big cities and small villages all over the country, but we’ve never been to place quite like this before. The views here are stunning and everyone has been so friendly, you can really feel the sense of community here. I am thrilled for all our winners and I know that this prize will not only benefit them, but will have a huge positive impact on everyone on the islands."

With a minimum of 32% of every ticket going to charity, players have raised over £500 million for thousands of charities and good causes to date. This Postcode Millions draw was held on behalf of Postcode Animal Trust. It supports charities which promote animal welfare and conservation.

Local good causes have benefitted from player support too. The Woodland Trust has received over £11.8 million thanks to players. Part of this funding will enable local island primary, Sgoil Uibhist a Tuath, to plant 420 trees to create a new native woodland area.

Another nearby cause, Volunteering Hebrides, received £19,861 to support people who are housebound due to physical or mental health issues. The project helped people who may otherwise have experienced social isolation to connect with each other.